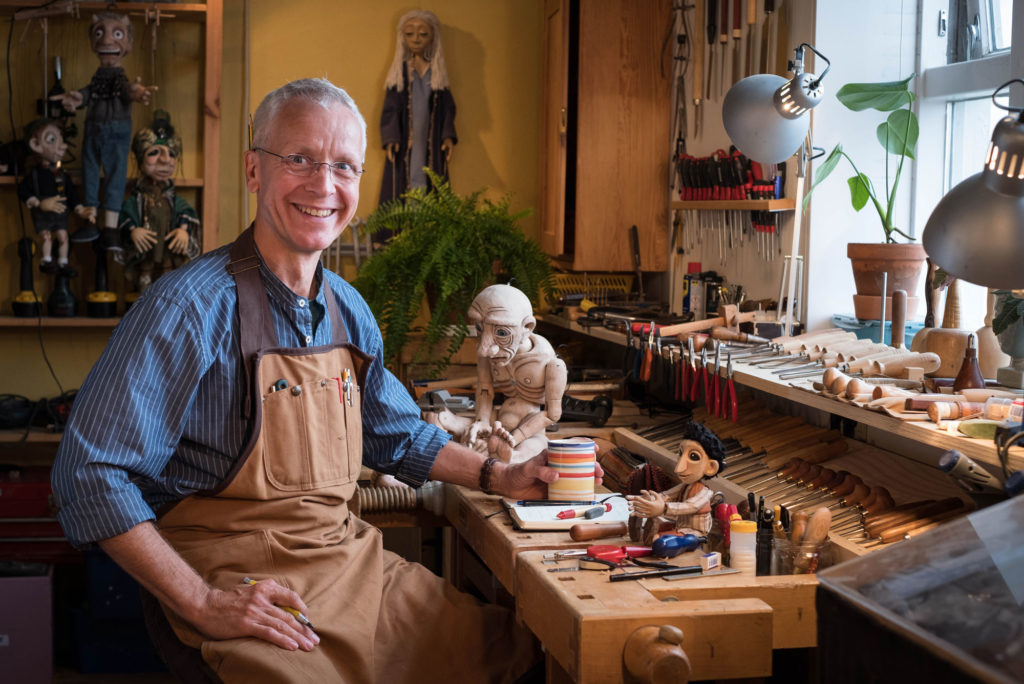 Are you ready to learn how to carve and manipulate wooden puppets?

If you can relate to the questions above, this workshop is clearly made for you. Our Foundation Course is a meticulously designed 4-week program for building a strong understanding and base to master “The Art of the Wooden Puppet”. Mastery is a long journey, there are no short-cuts, this workshop will offer you the strong base you need to undertake this journey.

Here is what you will learn during this workshop: I have been building and performing with puppets since I was a young child, and worked as a professional puppeteer for 34 years. You might know me from the famed Marionette movie epic “Strings”, seen my performances on our stage at the National Theater of Iceland or somewhere around the far corners of the world. But I am also a husband, father, grandfather, active black belt in Karate, passionate musician, scuba-diver, horse aficionado, and gardener. All this has a strong impact on my art and feeds my passion for life.

I have discovered the way of the puppet as my way of serving this world and making it a better place. The puppet can indeed be a powerful tool not only to entertain but also to educate, inspire, and heal. Yet like the musician has to faithfully practice his scales or the martial artist starts training with a white belt, the puppeteer must meticulously learn the many steps necessary to elevate his craft so that one day he becomes the fine artist which leaves his respective audiences spellbound and inspired.

There are no short cuts to mastery. I have taught in universities, theaters, and festivals all around the world and discovered that all too often students lack the basic building blocks needed to continuously and successfully grow on their journey. All too often even professional puppeteers perform with puppets that lack a deep understanding of their construction and functionality.

Over the years I have developed many highly functional techniques that I will share now in these online classes available for everyone. The puppet featured in this Foundation Course might seem simple to make and yet is stunningly effective in its appearance. I will also teach you in a fun and efficient way the basic skills and a deeper understanding necessary for your ongoing successful journey into puppetry.

I would be honored to accompany and guide you on this rewarding journey.

This workshop stretches over four weeks with two weekly classes. They consist of online videos that can be viewed anytime for a month. Additionally once a week I will answer students’ questions in a live online session.

I will guide you through the many steps in discovering the endless possibilities of this art. You will learn about the many tools of the trade and how to safely use them. You will gain a deep insight into the nature and various qualities of wood. I will provide you with sample patterns for your first puppet, but I will also teach you to modify these in order to create your own strong character. As you start the cutting and carving process you will gradually transform a block of wood into your first highly functional puppet.

In completing these carefully designed steps you will then be able to approach more advanced styles of puppets. Even if you have prior carving and puppet building experience you will highly benefit from this class as I share with you my wealth of innovative insights and discoveries of a dedicated career spanning 35 years.

It is a vital skill for the successful woodcarver to learn the art of sharpening his tools. In fact, I believe that the lack of this skill is the major reason we find so few puppet artists working in wood. Learning to properly sharpen your knives and chisels could be a workshop all by itself. I decided to add one detailed instruction class on sharpening as a bonus for every participant of my classes. This bonus course will be available already before the actual Foundation Course will start! I hope you will appreciate the pleasure of cutting your wood with a razor-sharp blade!

Mastery is a journey, not a destination and I am dedicated to making this journey challenging and yet joyful. Our explorations shall not only leave participants full of knowledge and enthusiasm for the art of puppetry but enrich their lives way beyond the realms of the puppet.

“We are what we repeatedly do. Excellence, then, is not an act, but a habit.” – Will Durant, inspired by Aristotele

Bernd Ogrodnik has been a prominent figure in the world of puppetry since 1986. He is the artistic director and co-founder of “Worlds of Puppets” and serves as the Master Puppeteer for the National Theater of Iceland.

He has a track record of over 7000 live performances and has toured all over Europe, Canada, the USA, Africa, and Asia as a performer and lecturer at international (puppet-) theater festivals, universities, and conferences.

He has been performing, directing, and creating marionettes, puppets, and masks for various theaters and operas around the world, for collectors and museums, commercials, TV, and film.

He has been creating marionettes, puppets, and masks for stages around the world, and his work is frequently featured on TV and film.

Bernd has gained worldwide reputation also through his ground-breaking work as a designer and lead puppeteer for the groundbreaking marionette movie “Strings”.

He is the recipient of countless prizes and awards both in his home country Iceland and internationally.

Most Common Questions and Answers:

When does the course begin?

The next course starts on October 1st and runs until October 29th.

Do I need any woodworking experience prior to taking this course?

No, the course is designed so everyone can participate.

Will I benefit from the course if I have already built wooden puppets?

Definitely! The course not only teaches the making of one of my most treasured puppet designs but offers a tremendous wealth in tips and trade secrets that even advanced builders will benefit from. I share what I have meticulously studied and discovered in my 35 years journey as a successful puppeteer! You do not want to miss out on that ☺

What if I want to jump to the advanced course immediately as my dream is to build marionettes?

It takes patience and tremendous knowledge to build a highly functional marionette. I invite you with all my heart to follow the steps I carefully designed for you to best reach your goal … there are no short-cuts to mastery ☺

What will I learn besides the making of a puppet?

I teach a holistic not a purely technical approach to puppetry. It is breathing, awareness, the art of communication, and an attitude of service which give purpose and strength to studying a technique. A lot of what we study when reaching for mastery in any art form strengthens our lives in multiple ways. Mastery is a journey, not a destination. Traveling widens our horizons and allows us to experience things not imaginable before our journey started.

Will I have direct access to Bernd during the courses?

There will be a weekly live session for questions and answers. Participants also have the option to send in their questions and watch the session at a time of their convenience.

If you have any other questions concerning this course offer, please send me an email at info@worldsofpuppets.com and I will answer as quickly as possible.

Looking forward to seeing you at the online class ❤️

My name is Bernd Ogrodnik, the way of the puppet has challenged me to no end, it has allowed me to travel to all corners of the world and brought me more experiences, joy, and heartful riches anyone could ever wish for. I hope you will choose to travel with me for a while in discovering the joy of PUPPET MASTERY.

Looking forward to seeing you at the online class ❤️

My name is Bernd Ogrodnik, the way of the puppet has challenged me to no end, it has allowed me to travel to all corners of the world and brought me more experiences, joy, and heartful riches anyone could ever wish for. I hope you will choose to travel with me for a while in discovering the joy of PUPPET MASTERY. After signing up, we send you a confirmation email to complete the registration. When registering, you will be added to the Worlds of Puppets mailing list and receive occasional emails with the latest news of the art of the wooden puppet. You can unsubscribe from the mailing list at any time. Learn more about our privacy policy here.